An edited version of this essay was published under the title “Found in translation” in the June–July 2013 issue of Verily Magazine.

One can say of language that it is potentially the only human home, the only dwelling place that cannot be hostile to man. ~ John Berger

Soon after I moved from to Montréal from Vancouver last fall, I signed up for French classes, deciding that learning the language would be a good way to start feeling more at home in my new city. For seven weeks, a dozen of us—each from a different country, each with a different story—talked and laughed and learned together, under the tutelage of our occasionally crazy but very gifted teacher, Nicolas. Thanks to them, I just know I won’t be able to hear or say the words catastrophe and beaucoup-beaucoup-beaucoup without thinking of our evenings together in our cramped little classroom.

Learning a new language, I’ve found, not only enriches you in all the obvious ways—it also helps you appreciate the ones you already know. I got a CD from my aunt in the mail a few weeks ago. Most of the songs are in Tagalog, and I’m finding myself listening to them over and over. Even if English is my first love, and French the language of love, there are some movements of the heart that just cannot be expressed adequately in either. But in Tagalog, the language of my childhood, the words strike chords that resonate far back and deep down to the very core of who I am.

I wasn’t always this appreciative of my mother tongue. I grew up speaking both English and Tagalog, but the former was always my language of choice. My favourite TV show was Sesame Street, the books my mother read aloud to me came from the States, and when I went to school, the medium of instruction was English. I devoured British and American literature, and started winning school prizes for English essay writing.

When my family and I left the Philippines for Canada after I graduated high school, I told myself that at least, unlike many immigrants, I already spoke English. I landed a retail job fairly easily, but to my dismay, my customers constantly asked me to repeat myself. It was humiliating, not to mention bewildering—wasn’t I speaking fluent English? Why didn’t anybody understand me?

Then and there, I made a vow, à la Scarlett O’Hara: As God was my witness, I would never be misunderstood again.

So began several months of hard work to get the accent and colloquialisms of Canadian English just right. I learned to flatten my a’s, round out my o’s, and tack on the occasional eh at the end of my sentences. I learned to call my sneakers runners, not rubber shoes; to say I was going to the washroom, not the comfort room or toilet, and to refer to my humble paper napkin as a fancy-sounding serviette.

Because I don’t look typically Filipino—most people think I’m Chinese—it became even easier to let others assume I was Canadian-born. I knew I’d succeeded when people began to ask me, “Were you born here?” instead of “Come again?” I’ve done it, I thought. I’ve arrived. I felt a tremendous sense of accomplishment, never stopping to consider that in acquiring a new accent, I was at the same time losing my old accent, and therefore a part of myself.

I also started becoming critical of Filipinos who insisted on speaking Tagalog or their own dialect to each other and to their children. We are in Canada now, I reasoned. They should speak English. How will they get ahead otherwise?

I had no idea then how insufferable I was becoming. I also have no idea how my opinions and assumptions about my fellow Filipinos got turned around so that I finally realized I was doing them all a great disservice by judging them solely on the merits of the language they chose to speak.

I think it was a gradual process, drawn out over several years as I wrote feature articles for a Filipino-Canadian magazine based in Vancouver, a job which put me in contact with so many interesting and inspiring men and women. Once I started listening to the stories they told, it no longer mattered what language they used for the telling.

I met Larina, who came to Canada in the early 1980s as a young wife, mother, and doctor. While attempting to obtain her license to practice medicine in British Columbia (BC), she encountered many obstacles due to the fact that she was a woman and a foreigner. She eventually became one of the first doctors in BC to become trained and certified in the relatively new field of addiction medicine. Together with other doctors, she is pioneering protocols for the implementation of province-wide addiction treatment.

I met Angelica, a nurse who organizes medical missions to the Philippines. I met Randy, the artistic director and choreographer of a performing arts group founded by young Filipinos born or raised in Canada to promote and preserve authentic Filipino dance, music, song, and drama. I met Jay, an entrepreneur who co-founded one of the first coworking spaces in Vancouver.

I met Erie, an educator who reads stories in Filipino dialect to children, and Jane, recipient of the Queen’s Jubilee Medal for her work with Migrante BC, a non-profit organization dedicated to the welfare of Filipino immigrants, permanent residents and temporary workers in British Columbia. These women, along with mural artist Bert Monterona, are strong proponents of the notion that arts and culture can serve to provoke discussion about social justice.

When I interviewed this last group, they were hard at work on a mural along with several youth members of Migrante BC. From different parts of the Philippines and a range of professional backgrounds, with varying dates of arrival in Canada, they share one thing in common: the immigrant experience. In the murals they paint, they tell their own stories. 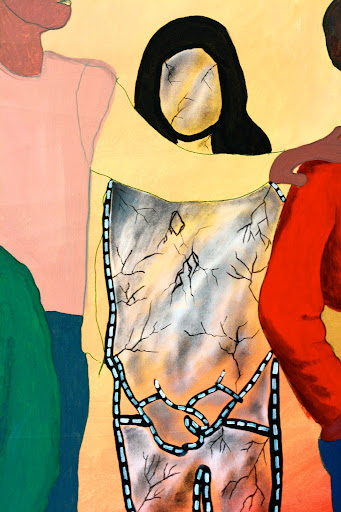 I remember being particularly fascinated by a a ghostly figure hovering in the background of one of the mural panels. Cracks stretched across her wispy body and featureless face, and her silhouette was outlined by a dotted white line similar to those drawn around murder victims on TV police shows.

“That’s the identity of this woman,” explained one young artist, pausing in her brushwork to point out a figure facing sideways with her arm outstretched. Overhead, an air plane soars. “She’s leaving her old self behind. So she has to build not only a new life, but also a new self.”

A new life, a new self. But at what price? Staring at that figure, I thought, This is my story, too. And I started to understand how much I’d traded away, so many years ago, for my new Canadian identity.

Recently I heard someone laughingly relate an experience he had at a Tim Hortons coffee shop. “There I was in this little Canadian prairie town, and I walk into the Tim’s and the whole staff is Filipino. None of them could really speak English. I ordered a double latte and got a mint tea.”

There was a time when I would have laughed along with him. Not any more. I turned around to face him. “Filipinos will go anywhere there’s a job. They adapt pretty fast, too. No English? Not for long.”

When I think now of that nameless Filipino woman I defended, I realize just how lucky I was to be able to speak English as a new immigrant. The truth is, English is an indelible part of me. It’s the language in which I speak, write, dream, and pray. And Canada is my home now. But I’ve discovered this past year that it’s never too late to learn a new tongue, nor to dust off an old, half-forgotten one, and to use it again.

More importantly, I’ve learned, as if for the first time, that Filipinos are amazing. It’s estimated that 2.2 million Filipinos work overseas. Some are lucky enough to emigrate with their families, but many must leave spouses and children behind. They are hard-working, creative, innovative, courageously optimistic, generously loving, and unfailingly cheerful, even in the face of the worst trials.

I’m proud to know them, and I’m proud to be one of them. No matter where I live, what citizenship I claim, or what language I speak, these are my people.